A color gamut is generally defined as a two dimensional area, like that represented in xy or u’v’ color space. Color gamut is commonly used in the display and printing industries to define the amount of colors that can be reproduced with those systems. However, with innovative light sources that enable the rendering of more vivid colors, color gamut area is fast becoming a critical metric for evaluating light sources. A color gamut is formed by a specific set of colors rendered by the source and is also referred to as the gamut area. If a different set of colors is used the gamut area will be different.

It’s important to understand that color rendering and color gamut are quite different but connected. Color rendering of a light source is measured by the Color Rendering Index (CRI). This is usually done by comparing the rendering of the first eight CRI reference colors by the test source to a reference source.  The gamut of the colors rendered by the light source can be measured by a metric known as Gamut Area Index (GAI). If the color points used to calculate CRI are connected in a two dimensional space, the bounded area they form is the gamut area.

Rendering the colors used in CRI with a black body, at a CCT of 3000K, will produce a CRI of 100. This is what light sources, of 3000K CCT, are generally compared to for the determination of CRI. For any light source that doesn’t render the color points exactly as rendered by the black body, CRI will be less than 100. Connecting the rendered color points will form a gamut area as shown in Figure 1. A gamut area can be defined for any light source that has been measured for CRI. 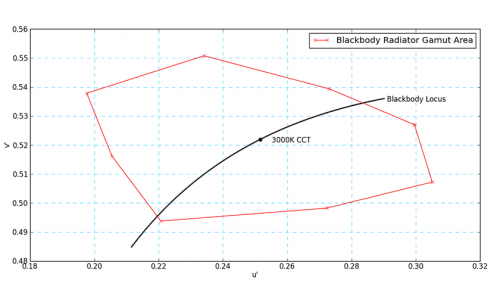 Note: GAI, as originally published, uses an Equal Energy Spectrum as the reference source rather than the black body. HONOURTEK reports both numbers but believes that using the blackbody reference is more meaningful.

Neither CRI nor GAI on their own are indicators of visual preference. Research has shown that in some cases there is a desire for colors to look more vigorous than is possible with a source that has a CRI of 100. If the reference colors are rendered more vibrantly, then CRI will be less than 100 and they will represent a larger gamut than the reference source, as seen in Figure 2. This increase in gamut area can be measured using the Gamut Area Index. It should be noted that a higher GAI number will not always mean that all colors are more vigorous. A higher GAI number can be achieved by increasing the gamut area only in certain regions of the color space. Therefore, it is important to also look at the gamut area plots, as seen in Figure 2, to get a complete understanding of the regions where there is an increase in gamut area. 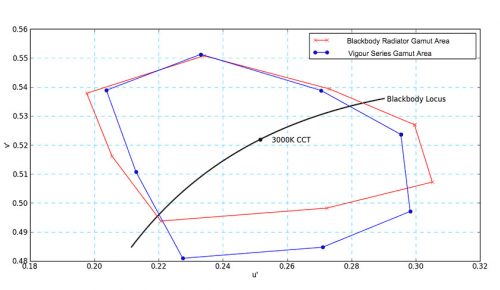 Figure 2. The gamut area of the VIGOUR Series® is not exactly the same as the blackbody reference so CRI by definition is less than 100, however the gamut area is larger and therefore has a higher GAI.

HONOURTEK’s color scientists engineered the spectral power distribution of the Vigour Series® light so that the colors look more vigorous compared to a halogen lamp for example. Balancing the consideration of CRI and GAI allows the light to achieve the preferred level of vividness without appearing un-natural.